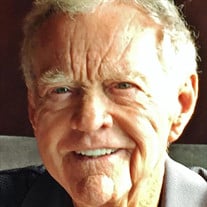 William Edward “Eddie” Goad Eddie was born July 11, 1935 in Atlanta, Georgia to Robert Lee and Helen Maria (Gibson) Goad. When he was five his family moved to St. Petersburg, FL where he grew up and went to school. At age 17 he enlisted in the U S Navy and was assigned to the USS Columbus. Eddie completed his four years of service as a 3rd class Petty Officer, receiving several medals and an honorable discharge. Following his service to our Country Eddie returned to FL, studied television repair and took the tests for the Police Academy and the Firefighter Academy. Being accepted to both, he chose to join the St. Petersburg Fire Department where he served for 20+ years achieving the rank of Lieutenant and often serving as acting Captain until his retirement in 1984. Following his retirement he packed up and moved to Hollywood, CA to study acting (a lifelong dream) and spent the next several years playing small parts in such television shows as The Golden Girls, Cagney and Lacey, General Hospital, among others and several movies including the Chicago Seven. He maintained his membership in the Screen Actor’s Guild (SAG) and the American Federation of Television and Radio Artists (AFTRA) for many years. When he re-retired Eddie moved to Las Vegas for several years and finally back to St. Pete area, then settling in Homosassa in the mid 1990’s. Eddie went with the angels Saturday, December 4, 2021. In addition to his mother and father, Eddie was pre-deceased by his sister Helen Goad Griffith, his brother Thomas A. Goad, and his love and companion of 25 years, Dorothy Davidson. He is survived by his brother-in-law and boyhood best friend, Gary Griffith, Jr., adored nieces Debbie Griffith Overby (Lin); Mickey Griffith Hale (Bob); nephew Gary Griffith, III (Maria) and many great and great-great nieces and nephews. He is survived by a daughter, Cynthia Goad, grandsons Garrett (Kirsten) Boyd / great-grandson Penn Alexander Boyd; and Brennan (Adriana) Boyd /great-granddaughter Miriam Hope Boyd; and a son, Billy Goad. Eddie had a host of dear friends that will miss this funny, fun-loving, caring individual who brought that something special to all their lives. Also left to cherish the many memories they made together is Pepper Krugman his best friend and companion for the past 7 years. Eddie met his beloved Pepper at karaoke, and they both loved singing at the Elks and the Moose among other venues. Pepper’s children, Donna Taylor and Scott Peters became an important part of Eddie’s life. They appreciate how he loved their mom and always made her feel special. They love and admire the man he was and Scott formed and even greater bond as part of Eddie’s caregiving team in his final few months. As long as his memory served him Eddie prayed to God for all his friends and loved ones every night. Eddie was a member of the Loyal Order of Moose and a lifetime member of the Benevolent and Protective Order of Elks. He loved boating, Cody’s Restaurant in Crystal River, his home on the canal in Homosassa, buying the (more than) occasional lottery ticket, going out with friends and cruising with Pepper. In addition to the special loving care Pepper and Scott gave Eddie in his final months a huge thanks goes to Bruce and Libby Crowell, Marla Rosen, Mike Childers, Robin Hill, Janet Stutzman and Vitas Hospice for the caring help, advice and moral support they so willingly provided any time, day or night, they were needed. A memorial service will be planned for a future time when family and friends can gather to honor William Edward Goad, the man that served his country and his community and to reminisce (and maybe sing a song or two) and to share special memories of “Eddie”, the friend and loved one we will forever miss. Memorial Donations in memory of William E. Goad may be made to the following: Alzheimer’s Association Florida Gulf Coast Center 14010 Roosevelt Blvd., #709 Clearwater, FL 33762 West Citrus Elks Lodge #2693 P.O. Box 3719 Homosassa Springs, FL 34447 These funds benefit our veterans.

William Edward &#8220;Eddie&#8221; Goad Eddie was born July 11, 1935 in Atlanta, Georgia to Robert Lee and Helen Maria (Gibson) Goad. When he was five his family moved to St. Petersburg, FL where he grew up and went to school. At age 17 he... View Obituary & Service Information

The family of Mr. William Edward "Eddie" Goad created this Life Tributes page to make it easy to share your memories.

Send flowers to the Goad family.