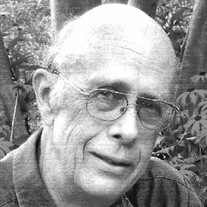 John W. Strawbridge III of Inverness, Florida, surrounded by his loving wife Susan and sister-in-law Lorraine Cramer, passed away Sunday, November 7, 2021 following a brief illness. He was born July 30, 1943, and was a native of Williamsport, Pennsylvania, and graduated from Williamsport High School, briefly attended Penn State University and subsequently graduated in architectural drafting from what was then called the Technical Institute. He was the first director of the Thomas Taber Museum and later became director of the Hershey Museum in Hershey, PA in the early 1970s. He had a lifelong interest in wildlife, and with his friend, Clyde Peeling, spent a month in Colima, Mexico filming wild animals; together they designed and built ZooAmerica Wildlife Park in Hershey in the mid-1970s. John was an avid photographer, a talented illustrator and clever designer who created interpretive signage for many nature centers and parks in East Africa, Central America, Florida, and Pennsylvania. These included Hawk Mountain and most recently a wildlife refuge being developed near State College. He had eclectic tastes in art, classical music, and architecture. Clyde Peeling tributes their 58-year friendship as important to the development of Reptiland. “It was my good fortune that I met him in 1964 and the synergy that developed between us has influenced my thinking about a variety of subjects ever since. We continued to ‘brainstorm’ ideas until his death.” John was predeceased by his first wife, Priscilla (Rothermel) of Williamsport, PA. He leaves behind three stepsons. John is survived by Susan, his loving wife and soul mate for 16 years. Together they shared many wonderful memories, interests and adventures. Both enjoyed and were inspired by the natural world and all its creatures. They also shared an appreciation for art and music, and much more. Adventures together included exploring Florida’s rivers, preserves, and trails, as well as art museums and exhibits. In recent years they made several trips to Mid Coast Maine and Monhegan Island where they enjoyed photography, long walks, and painting. He is also survived by his sister-in-law, Lorraine Cramer and her sons, Gregory Sean Mooney and Jon Mooney, and her daughter Chenoa Sblano. John will be deeply missed by his family, friends, and family pets, Sophie, the tortoise shell cat and Phoebe, the Chihuahua. A Celebration of John’s Life will be held at a later date.

John W. Strawbridge III of Inverness, Florida, surrounded by his loving wife Susan and sister-in-law Lorraine Cramer, passed away Sunday, November 7, 2021 following a brief illness. He was born July 30, 1943, and was a native of Williamsport,... View Obituary & Service Information

The family of Mr. John W. Strawbridge III created this Life Tributes page to make it easy to share your memories.

Send flowers to the Strawbridge family.